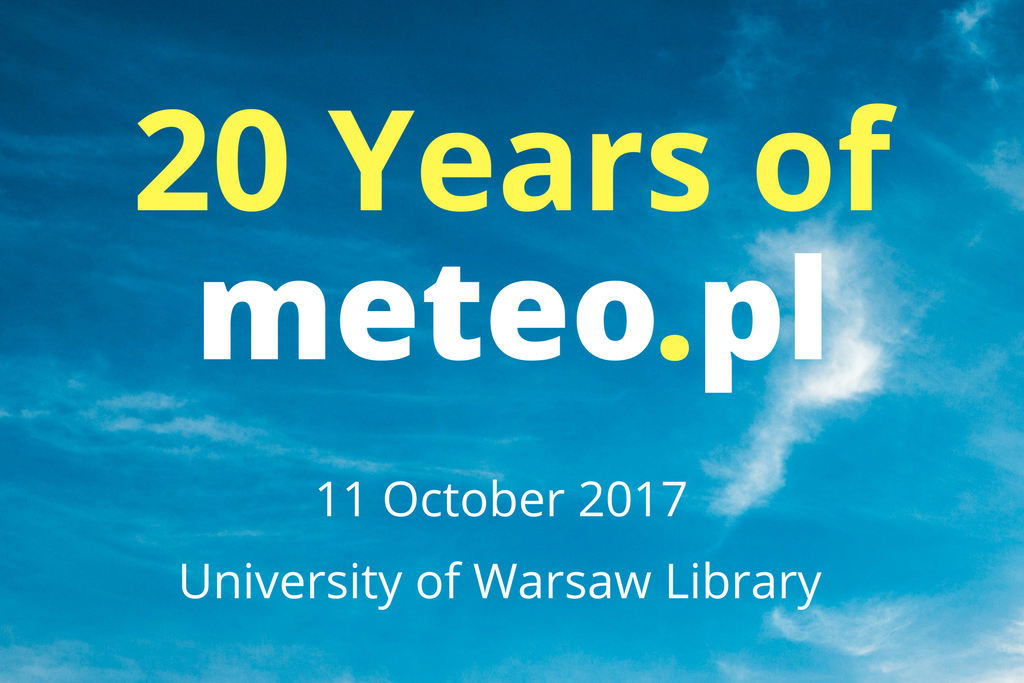 Meteo.pl, the well-known and popular web service providing numerical forecasts to the general public in Poland, is celebrating its 20th anniversary this year. From its humble beginnings in 1997 to today’s reach of nearly 2 million unique visitors each month (which amounts to 5 percent of the Polish population) both the team and the service have gone a long way. Meteo.pl is maintained by a dedicated team working at the Interdisciplinary Centre for Mathematical and Numerical Modelling at the University of Warsaw (ICM UW). Always doing their best to provide the top forecasting quality, they are proud that it has become the hallmark of the service.

The numerical weather prediction (NWP) at ICM UW started with tests conducted by Dr Bogumił Jakubiak (then an employee of IMGW – Polish meteorological service). The first experimental runs started in 1994 with the use of 8 CPU supercomputer CRAY EL98. This was achieved thanks to close cooperation with the UK Met Office. The first model run at ICM was the Unified Model (UM). The modern version of UM is still the flagship of the ICM weather modelling. The first forecast was made available on the Internet on 1 May 1997. Only 2 months later, in July 1997 the model correctly predicted what was later called the Flood of the Century. Intense rains in southern Poland caused very significant flooding resulting in huge amount of damage to infrastructure in many cities including Wrocław.

In the same year we started working on introducing another model to ICM forecast system – COAMPS (Coupled Ocean-Atmosphere Mesoscale Prediction System). It was implemented in cooperation with US Navy Naval Research Laboratory (NRL). Together with UM, both models were presented online. For the Polish, users this was a new quality as those were the first numerical forecasts publicly available. In the following years, the popularity of the service grew enormously, which was best illustrated by the huge support coming both from Poland and abroad when in 2007 ICM was forced to temporarily restrict the forecast’s availability due to technical reasons.

After 1997 not only did the ICM team provide the public with the most detailed forecast but it also successfully took part in many national and international research projects. This led to new ways of using NWP and improvements introduced to the models themselves.

Despite its 20-year-long history (which is a very long time in the world of supercomputing) the meteo.pl team keeps thinking forward and is constantly working on enriching, developing and improving its services. Recently, our cooperation with Met Office was tightened by ICM entering the UM Partnership with the status of Associate Partner. In early 2017, in order to facilitate more flexible service, ICM introduced an operational instance of WRF.

The two decades of meteo.pl history make a story of success: we have a dedicated user base of nearly 2 million people, 60 percent of whom use the service at least once a day. This is the testament to the ICM past work. We see the 20th anniversary as a great occasion to look into future. New technology allows for enriching user experience and presentation beyond the traditional means. The forecast information is richer than ever before – meteo.pl started with a 17 km horizontal resolution model whereas now we are testing 1.5 km resolution (more than 11x improvement). In fact, we are planning to go well beyond this results using the exciting new possibilities that the cutting edge ICM’s infrastructure is creating for us.